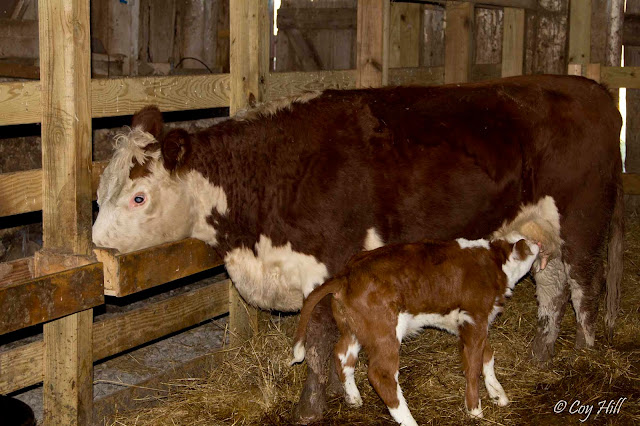 Two weeks ago I posted the story of the birth and problems with this couple.  At the time of the post the cow would not allow her calf to nurse nor allow milking.  Using kicker clamps I was able to milk her some that evening but soon she learned how to circumvent the kickers and fire away unhindered.  Resorting to a belly band and a leg rope I was able to restrain her to allow the calf to nurse a little.  However unrestrained she would kick her baby, knocking him back several feet at times. Concerned for the calf's health and strength I continued supplemental feeding.

By day three I noticed the calf was having problems walking and maintaining its balance while standing.  While I cannot be sure, I suspect that she had injured him with some of her blows. At this point I took him away from her and would only allow him contact with her while she was restrained.  Keep in mind that she was showing every normal mothering instinct by this time except allowing nursing.

Day six I decided to once again allow him to nurse without restraining the cow and after only a couple slurps she struck at him with a powerful blow.  Fortunately I was supporting the calf and able to move him out of harms way.  At that point I finally lost my cool!  Moving the calf to its pen, I opened the stable door and chased her out informing her as she went that she had had her last chance, (yes I do talk to the cows).  A few minutes later I texted my livestock hauler about taking her to market.  He soon responded that he would pick her up the following Wednesday, some six days away.

For the next two days I fed the calf while she spent much of her time standing outside the barn bawling and running frantically from door to door anytime I was near the barn.  Finally I relented and invited her in for one more "last chance", and this time she allowed the calf to nurse without so much as raising a foot!  Keeping the calf in a separate pen and only allowing them together for nursing over then next two days I was able to observe that the transformation was complete.  She is not only the doting mother but also the consummate wet-nurse.

Perhaps even with cattle the old adage, "distance makes the heart grow fonder", is true. Whatever the case the calf now has a good mother and her trip to hamburger land is postponed indefinitely.
Posted by Coy Hill at 1/06/2019 05:28:00 PM

Oh, I'm so glad that she is stepping up!

A happy ending for all. I'm guessing it was the 'talk' you gave her that made the change.