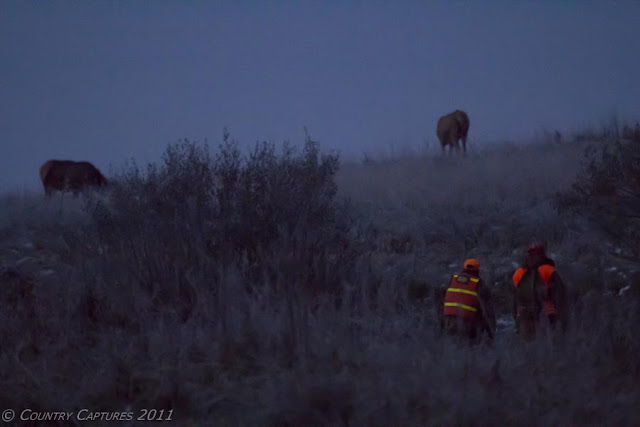 By the time of our predawn arrival at the parking lot at the end of Dewey Road a number of vehicles were already there.  Soon more guide and clients arrived and headed out into the game lands adjoining the elk viewing areas.  Willard and I headed up towards the saddle stopping where the road makes the sharp left-hand turn just after passing the gate.  As the scene before us began to brighten we could see orange vested people and elk spread out across the hillside facing the viewing areas. 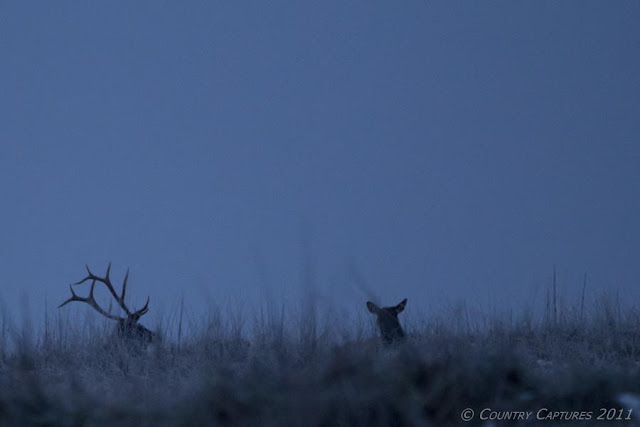 This bull was bugling from his bed 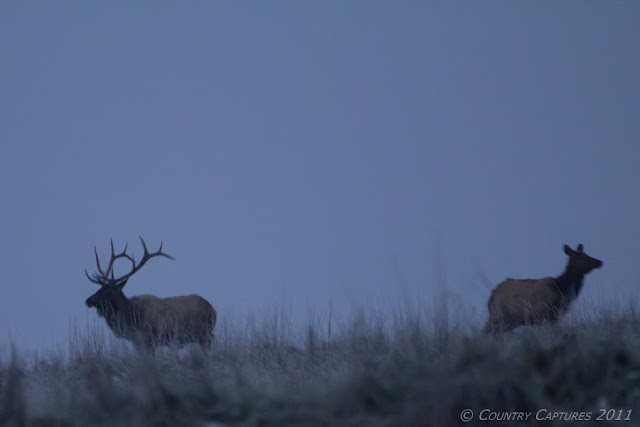 At 7:38 I was looking at the camera when a shot rang out.  Seeing that the bull was now up I could see him shaking his head, undoubtly hit. 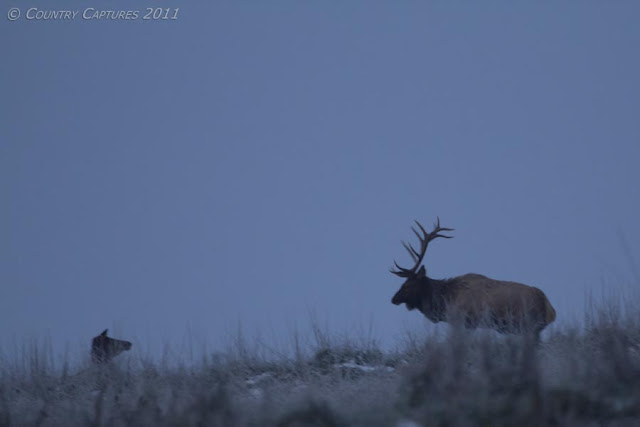 As subsequent shots roared the bulls body convulsed with each impact 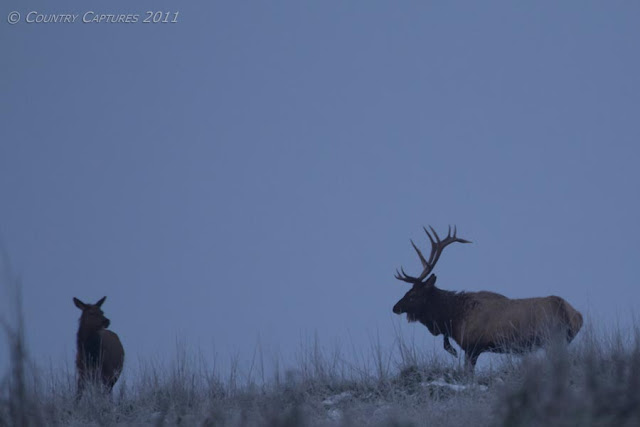 Stagering, he attempted to stay on his feet 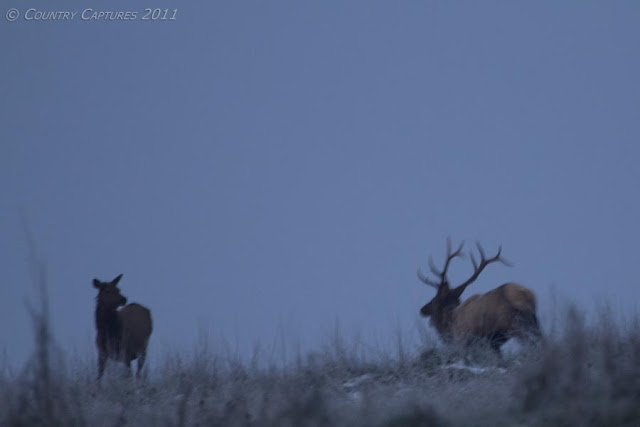 But to no avail 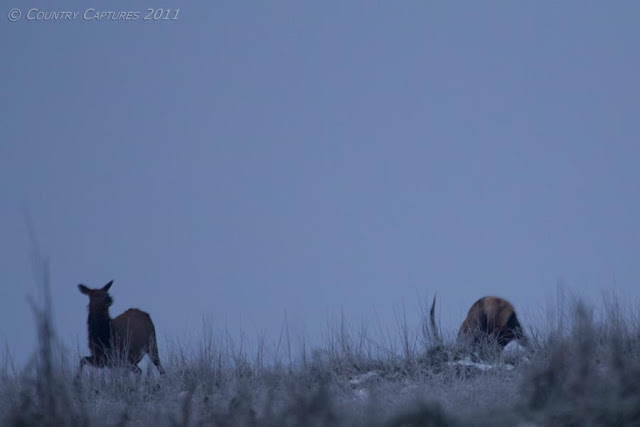 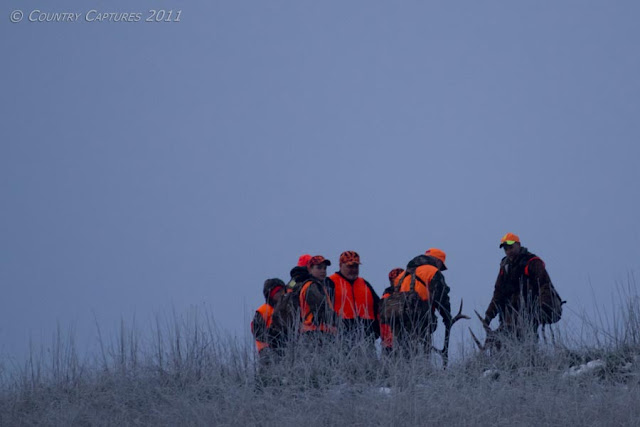 Within two minutes the party had assembled around the fallen animal 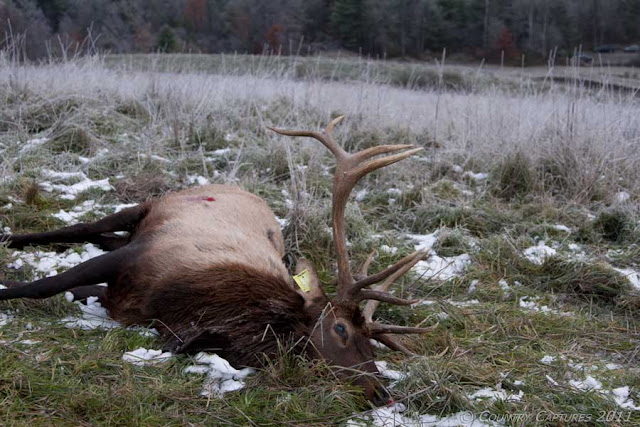 Once a majestic animal, now a trophy 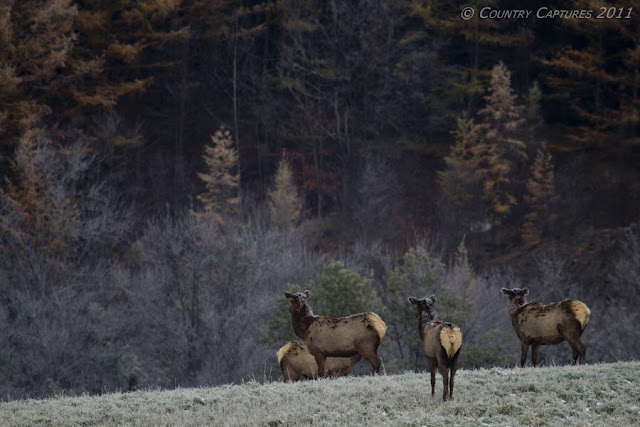 Not overly alarmed, most of the herd moved only a short distance before retuning to grazing.

The elk on and around Winslow Hill, being exposed to thousands upon thousand of viewers each year have little to no fear of humans.  In this area there is no elk hunt; to say it nicely it is a harvest.

Stopping by the Elk Check Station this evening I learned that five bulls and a number of cows had been checked by 4:45pm.  It was also reported that the bull named "Hook" or "Hook Ear" photographed by many on Winslow Hill during the rut was among the animals taken.
Posted by Coy Hill at 10/31/2011 10:27:00 PM

Thank you for this report altho it is not to my liking. Hunter? oh to be a hunter taking pride in killing a bull in this fashion. What a tragedy this is.

This game commission is in no way my fashion of hunting . They call hunting a sport and bring something like this to us? they should be ashamed and hide their heads.

I remember when hunting was a man's sport to have fun and get out of doors and it wasn't expensive like today//If they need the money so bad there is or has to be a better way. Those who didnt get the tag should be refuned, but wait thats what this elk hunt in Pa is all about what a shame.

How does anyone take pride in that? Not in hunting in general, I get that, but in shooting a trusting animal that pretty much just stands there as you walk up to it. It's on par with a canned hunt.

I thought this was a reserve for the elk, it sounds more like a game preserve. How sad!

It makes my stomach sick to see such trusting, majestic creatures taken in such a way.

Nice photo essay,
Its sad that some are upset by this rather than understanding the importance of conservation and keeping the herd healthy. I think its a blessing that someone is willing to invest in this harvest and much better than seeing smashed rotten Elk along the highways. A clean kill is preferred over wounded Elk running through the woods in my book and grilled elk loins or pan fried medallions definitely are preferred to carrion and higher insurance premiums.

Very sad, but necessary I suppose. However, I feel there isn't much sport in this - the animals are so trusting.

Thanks for posting this. I did not enjoy reading it but it is something that needs to be published. This type of information needs to be more widely published and distributed. The public needs to see and recognize that the Pa Elk Hunt is actually a Pa Elk Shoot and that regulations need to change to more appropriately focus on culling the herd versus targeting trophy animals.

This is so sad, it is like shooting ducks in the barnyard pond. I just cannot get my head around anyone targeting such a majestic animal.