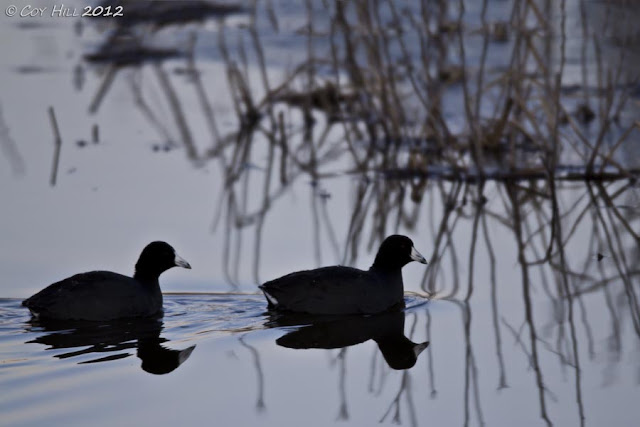 The thousands of geese present at Blackwater can cause the casual viewer to miss many of the other inhabitants of the wetlands.  At first glance the geese may be all that you see but a closer look reveals many other species mixed in.  One of those species, the subject of today's post is the American Coot.

Although they look much like a duck and swim like a duck they aren't ducks; Coots are member of the rail family.  Unlike the other species of rail, the coot has lobed feet; an adaptation that makes them excellent swimmers. 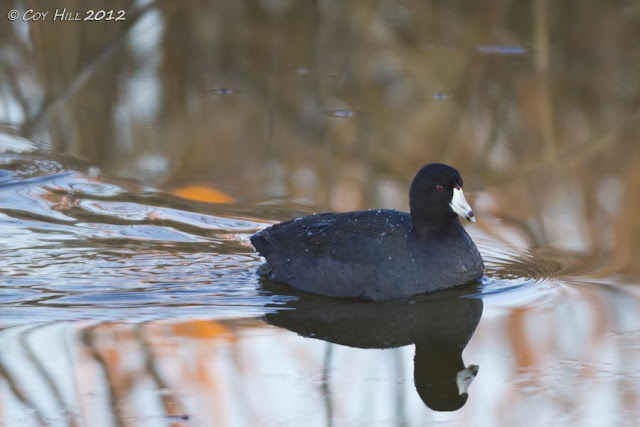 I could count the number of times I have encountered coots in my home area on the fingers of one hand so I was very pleased to be able to photograph this pair of American Coots foraging at Blackwater NWR.
.
Posted by Coy Hill at 1/22/2012 06:38:00 PM

Great shots of the Coots! Blackwater NWR is one of my favorite places to bird.

Thanks Eileen, it is a wonderful place! if only it were closer home.

culture
That last picture is exceptional.

Love the Coots! They're funky little feet are the funniest looking things...

Very nice! We get the American Coots here in the spring/summer months. Love your reflection shot.

Superb Coy. I've not seen this bird since 2009, when one lost its way in Iceland! Although I sometime see some in France. I love the reflection you do have on the water! The reflect are sumptuous!

We've got coots that are wintering here. Cool birds to watch, although they can be a bit skittish. You got some excellent shots!